This year’s General Assembly was held in the auditorium of the Evangelisches Kreuzgymnasium during the Bach Festival in Dresden. More than 80 members attended and were

informed about not only the work of our organisation in the past year, but also future projects.

We were also delighted to welcome our Ukrainian guests to this year’s General Assembly. These six Ukrainian Bach enthusiasts have been collaborating with us in the organisation of our Bach Academies in Donetsk for many years. Thanks to generous donations from our members, we were able to invite them to attend this year’s Bach Festival in Dresden.  We would like to thank everyone who made their visit possible!

After the meeting many members took part in interesting tours of the Kreuzgymnasium campus and got a feel for the rooms and facilities that are used by the members of the Dresdner Kreuzchor on a daily basis. Many thanks to the Kreuzchor staff for their hospitality! 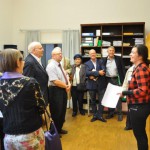 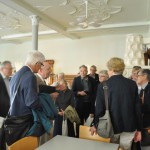 Our organisation’s next General Assembly will take place on 5 August 2017 in the old library of the palace Residenz Ansbach, as always during the Bach Festival of the Neue Bachgesellschaft.

Invitation to the 2016 General Assembly

This year’s General Assembly, which will include the election of 12 Board of Directors members, will be held during the Bach Festival Dresden, on Saturday, 24 September 2016 at 10:00 a.m.

The official invitation, including an agenda for the meeting, will be sent to you with our summer bulletin in the next few days.

We look forward to welcoming you to Dresden for the General Assembly and the Bach Festival!

The Updated Bach Festival Flyer is Now Available!
17 May 2016

The programme for the Bach Festival Dresden now features more than 70 exciting concerts and events, several of which have been added since autumn 2015.

The complete programme can be downloaded here as a PDF: Bachfest_2016-Flyer2-d_Mai 2016

Join us in looking forward to amazing concerts in Dresden! 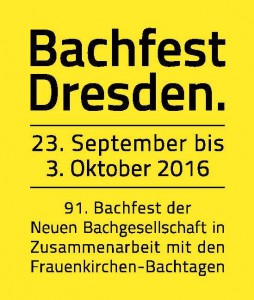 Advance tickets are on sale now!

You can purchase your concert tickets in advance from the individual organisers or through the joint advanced sales system.

For this Bach Festival, we are working with a number of different organisers. Please use the following link to find an overview (in German) of the concerts, the respective organisers and the places where tickets can be purchased: advanced ticket sales for Bach Festival 2016

More information can be found under www.bachfest-dresden.de. We look forward to our next Bach Festival and to welcoming many Bach enthusiasts to Dresden! 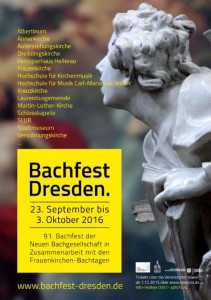 Johann Sebastian Bach and Dresden – this story remained unfinished during the composer’s lifetime. The city of Dresden was the focus of a great longing for the Leipzig Thomaskantor.  Employment at the court in Dresden was a lifelong aim that was never realised by Bach. The works of Bach are, like in all major music cities of the world, at home in Dresden, but they are kept alive in this city by well-known artists, choirs, and orchestras, and are played at all the outstanding locations for musical life. The Bach Festival Dresden 2016 combines a wealth of experience and expertise in a program spanning a wide arc across the almost endless Bach repertoire, and which will be presented over eleven days. From the major concerts of the Frauenkirchen Bach Days, concerts from the Dresdner Kreuzkirche and the Dresden Philharmonic, to exciting projects in the Albertinum, and at Festspielhaus Hellerau, as well as events at the City Museum in the Landhaus, and music in churches and town halls, The Bach Festival 2016 promises great encounters and discoveries in Dresden. It will appeal to Dresdner music lovers as well as to visitors from far and wide. A warm welcome to Bach Festival Dresden 2016!

The New Bach Society’s renowned Bach Festival will be held in 2016 in cooperation with the Frauenkirchen Bach Days from June the 23rd September to the 3rd of October 2016 in Dresden. 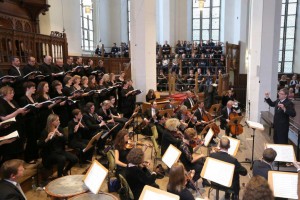 On Sunday, 21 June 2015, this year’s Bach Festival of the Neue Bachgesellschaft was brought to    a close with a performance of the Mass in B minor under the baton of Hans-Christoph Rademann in the Thomaskirche (St. Thomas Church) in Leipzig.

Our Bach Festival was held in conjunction with the Leipzig Bach Festival under the theme “So glorious you stand, dear city!” On the occasion of the 1,000th anniversary of the first recorded mention of Leipzig, the festival featured performances of works that either were composed in the city or are closely linked to its ever-vibrant music scene. Renowned international artists and ensembles were invited to join the St. Thomas Boys Choir, the Leipzig Gewandhaus Orchestra, Sir John Eliot Gardiner (president of the Bach Archive) and Gewandhaus conductor Riccardo Chailly in keeping Bach’s heritage alive in Leipzig. Guest artists included Philippe Herreweghe with the Collegium Vocale Gent, Masaaki Suzuki with graduates of the Royal Academy London and Juilliard School, Hans-Christoph Rademann with the Gächinger Kantorei and the Ensembles in Residence for the season 2015, Collegium 1704 and Collegium Vocale 1704 under the direction of Václav Luks.

In addition, the festival’s “BACHmosphere” series presented open-air classical concerts with sophisticated Bach arrangements in Leipzig’s market square, as well as virtuoso crossover jazz and a Wandelkonzert (“promenade concert”) in the city’s impressive, historic shopping arcades. The highlight of the festival’s “b@ch for us” programme for children, families and young people was an appearance by the Chinese-German Choir Academy with young singers from the cities of Leipzig and Beijing.

We would like to thank the Bach Archive Leipzig for hosting this year’s magnificent Bach Festival!

The next Bach Festival of the Neue Bachgesellschaft will take place in Dresden from 23 September to 3 October 2016. Further information on this event will be available at www.bachfest-dresden.de starting in the autumn of 2015.

What about enjoying a cup of coffee and a delicious piece of cake in between concerts and virtual visits of the “Himmelsburg”? What meeting other friends of Bach’s, starting up conversations, establishing relations? All that is possible at the Neue Bachgesellschaft’s café    END_OF_DOCUMENT_TOKEN_TO_BE_REPLACED

In preparation for the Bach Festival Rostock 2019, the organisation Bachverein Rostock e.V. will be hosting another benefit concert: on the         END_OF_DOCUMENT_TOKEN_TO_BE_REPLACED

Our new newsletter was released today!
As always, it contains information on the activities of our organisation, along with several interesting articles covering a wide variety of topics on       END_OF_DOCUMENT_TOKEN_TO_BE_REPLACED

It’s official: in November 2018 young musicians in Dnipro, Ukraine, will once again be spending ten days studying and performing the works of      END_OF_DOCUMENT_TOKEN_TO_BE_REPLACED

The new publication from the well-known Bach scholar Prof. Hans-Joachim Schulze is a compilation of more than 60 articles from 50 years of Bach research. These texts are organised in seven chapters    END_OF_DOCUMENT_TOKEN_TO_BE_REPLACED

Even before our fond memories of the Bach Festival Ansbach have faded, we can start looking forward to our organisation’s next Bach Festival: from 28 September to 7 October 2018,    END_OF_DOCUMENT_TOKEN_TO_BE_REPLACED

On Saturday, 5 August 2017, the annual General Assembly of the    END_OF_DOCUMENT_TOKEN_TO_BE_REPLACED

Our organisation’s 92nd Bach Festival ended yesterday with Bach’s Mass in B minor. This was the second time since 1954 that our Bach Festival was held in connection with the event Bachwoche Ansbach. All members of the NBG    END_OF_DOCUMENT_TOKEN_TO_BE_REPLACED